As many patients in New Hampshire eagerly wait for the Department of Health and Human Services to finalize the rules regarding medical marijuana dispensaries, it is common for people to ask: “So will this stuff be decriminalized in New Hampshire for everyone?” Despite the fact that the New Hampshire House of Representatives continually passes bills decriminalizing marijuana, possessing a small amount of the plant is still considered to be a punishable crime in New Hampshire. In fact, the lowest level offense is a Class A Misdemeanor.

As the law currently stands, a person possessing ANY amount of marijuana is eligible to go to jail for up to 1 year and be fined up to $2,000. This means that even if you are caught with residue in a pipe, small particles in a bag, or a few stems, the law says you can be locked up. In practice, the majority of people who are caught for small marijuana possession do not serve jail time but it is not unheard of.

The following table depicts the maximum penalties for giving away, possessing with intent to sell, or selling marijuana depending on the amount: 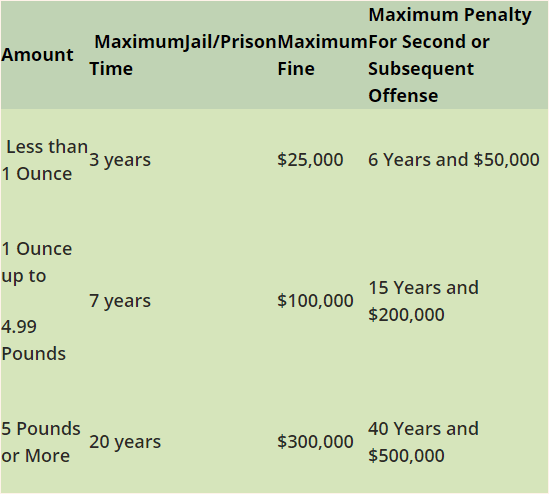 Additionally, each of these crimes is a felony, which means that many of your freedoms could be destroyed by a conviction. Your job prospects, ability to travel, the ability to apply for student loans or government programs, and the ability to own a firearm could all be impacted.

If you have been arrested for a crime involving marijuana, it is important to retain a knowledgeable attorney who will fight to preserve your freedom. You should consult an experienced criminal lawyer at Douglas, Leonard & Garvey, P.C. Call us at (603) 288-1403 or fill out our online contact form.